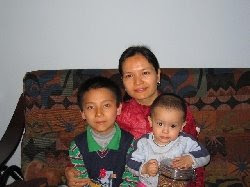 XINJIANG, China, May 27 /Christian Newswire/ -- CAA has learned that, the trial for Uyghur Christian Alimujiang Yimiti commenced on May 27 at 10am. The trial lasted for 6 hours and 30 minutes. The court recessed from 1pm to 4pm before resuming. Mr. Yimiti was allowed legal representation from two lawyers who were permitted to be present during the trial. Mr. Yimiti's wife, Nuergul, however was prohibited from entering the courtroom as were members of the media due to the Government's claims of the sensitivity of the case. At 7:30pm the court reached a verdict that the case was sent back to the original PSB prosecutors due to "insufficient evidence" against the accused.

On Monday in Beijing a US delegation led by assistant Secretary of State, David Kramer reinstated human rights dialogue with the Chinese Government. Mr. Yimiti's case will be one that will be raised to the Government officials. In an interview this morning with CAA's President Bob Fu, Mr. Yimiti's wife, Nuergul, restated her husband's innocence due to the fact that he is an agricultural worker and has no access to state secrets, nor was he engaging in separatist activities. She pleaded for the early release of her husband. She also relayed to Mr. Fu that her two year old daughter points to her father's picture everyday and tells visitors that her dad is busy buying toy cars for her and will return soon. Nuergul thanked the many people around the world for their continual support and prayers which have continued to strengthen her faith through this difficult time.

CAA has also learned from two independent sources that the Ministry of Public Security has received funding from the Chinese Central Government to increase their campaign of eradicating House Churches throughout China. While the amount of funds allocated for this campaign is unknown, the steady increase of persecution against house churches continues to rise substantially across China. On Sunday May 25, the Beijing Gospel Church, home to more than 1000 members was raided by PSB Officials. Pastor Gao Zhen was detained and interrogated before being released at 6:00pm.

In a separate incidence, a house church Seminary in Weifang City, Shandong Province was also raided by more than 30 PSB and RAB Officials. The seminary is occupied by 48 students and staffed by 3 teachers. All 48 students were told to return to their home-towns immediately. Officials detained the staff members and confiscated Bibles, computers, printers and the seminary's mini-van. Authorities labeled the school and its members as followers of Falun Gong.