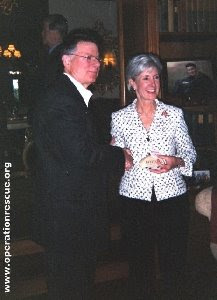 WICHITA, Kansas, May 28 /Christian Newswire/ -- While under investigation by the Attorney General's office and amid increasing calls for criminal charges by the Kansas Legislature, late- term abortionist George R. Tiller and his entire abortion clinic staff was honored by Gov. Kathleen Sebelius at a lavish secret party held at Cedar Crest, the Governor's mansion in early April, 2007.

Operation Rescue was the first to uncover evidence of this event, which was mentioned in Robert Novak's Washington Post column on Monday. OR obtained a set of 27 photographs from a confidential source that told OR the party was held exclusively in Tiller's honor. Tiller and his staff were the only guests invited to the gala event that featured, according to the source, a menu of steak and lobster.

A request for information made under the Kansas Open Records Act (KORA) concerning the cost and source of funding for this event was answered with scant information concerning four unrelated events held at Cedar Crest during March and April of 2007, but no mention of the Tiller soiree. The final photocopy of the documents seems to show a female giving the middle finger.

The Governor's Office is currently in violation of KORA laws regarding a second and more specific request for open records submitted by Operation Rescue President Troy Newman. Legal action is being considered.

Tiller is a major contributor to pro-abortion candidates in Kansas, giving hundreds of thousands of dollars through a complicated series of political action committees and non-profit organizations. Because of this hard-to-trace influx of cash, Democrats have risen to power in this conservative Red state, something that has drawn national attention to Sebelius' supposed political prowess.

"Sebelius' office arrogantly believes that they can keep her strong ties to Tiller a secret, but their efforts to keep the truth from the public have only exposed their corruption," said Newman. "Sebelius would not be governor today if not for Tiller's financial support. She owes him her career. Every agency in Kansas that could hold Tiller accountable for illegal late-term abortions, from the Board of Healing Arts to the Kansas Supreme Court to the Attorney General, are all laced with Sebelius appointees. It is little wonder that they all have done nothing but stall and obstruct efforts to prosecute him."

About Operation Rescue
Operation Rescue is one of the leading pro-life Christian activist organizations in the nation. Operation Rescue recently made headlines when it bought and closed an abortion clinic in Wichita, Kansas and has become the voice of the pro-life activist movement in America. Its activities are on the cutting edge of the abortion issue, taking direct action to restore legal personhood to the pre-born and stop abortion in obedience to biblical mandates.