New President Seeks to Establish Model for a Biblical Univ. 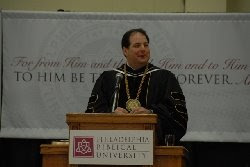 New President Seeks to Establish Model for a Biblical Univ.

One of the hallmarks of Williams' presidency will be his vision to define and establish PBU as a model for a "Biblical University" where curriculum and philosophy not only distinguish the institution from Christian liberal arts, or Bible colleges, but where the PBU experience is marked by Christian scholarship, and service informed by a biblical worldview.

Also, he will continue to develop the academic endeavors of PBU-founded in 1913 and a recognized leader in Christian higher education-as well as elevate the profile of the University within the region through an integrated institutional marketing plan and campaign that is already underway.

Prior to his appointment by PBU's Board of Trustees on October 11, 2007, he had served as the University's Sr. Vice President and Provost since 2005. Dr. Williams' predecessor Dr. W. Sherrill Babb, who was PBU's president for 28 years, was appointed Chancellor.
Williams, a cum laude graduate of PBU, is the first alumnus to serve as president of the University. He began his academic career at PBU in 1994 when he joined the faculty in the School of Arts and Sciences. He rose through the ranks as Associate Dean of Undergraduate Education and then became Vice President and Academic Dean before leaving in 2001 to become headmaster and CEO at Trinity Christian School in Fairfax, VA, a suburb of Washington, D.C.

He returned to PBU in July 2005 as Sr. Vice President and Provost where he developed and implemented numerous initiatives and plans to enhance and strengthen PBU's academic programs including a Center for University Studies and appointment of a faculty scholar; and a curriculum revision that broadened course offerings across a spectrum of disciplines. Students and faculty alike responded enthusiastically to his leadership and his challenge to apply Christian perspectives and biblical worldview in the marketplace of ideas.

President Williams holds a B.S. in Bible degree from PBU and his M.Ed and Ph.D. degrees from Temple University in Philadelphia. He speaks in churches, schools, colleges, businesses, and professional organizations on issues of Christianity, culture, education and leadership. He was visiting lecturer for spiritual formation at the Witherspoon Fellowship in Washington, D.C. and serves on the Board of Governors of the John Jay Institute for Faith, Society and Law in Colorado Springs, CO.